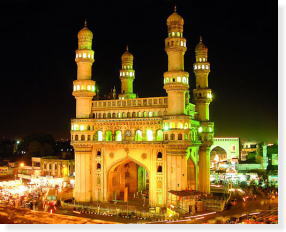 I’ve been here for a week, it’s my first time in India and haven’t really done any sight seeing. So it was really great today to head out into the old town on my day off. This is more like what I imagined India to be, with rickshaws, traffic, fumes, noise and masses of people crowding the streets.

The main sight of Hyderabad is the Charminar which is very impressive, and you can climb right to the top.

Back on the ground we were scouting around for some filming locations later in the week, so headed off into the backstreets to see the pet stalls, market stalls and kids playing cricket. It was also nice to be able to walk around and not having people hassling to sell you things, everyone seemed genuinely friendly when saying “hello”. That’s not a feeling you get in every country.

One real gem was an old bookshop that was just like something out of a Harry Potter movie, packed from floor to ceiling with old books, maps and manuscripts, all with the pages facing outwards so you never knew what you were going to find. The gentlemen behind the counter was pulling out maps and documents that you really couldn’t buy anywhere else. The professor that I was with inquired about a specific book and we were quite surprised at the price, the owner simply smiled and said “This is a rare book, but you already know that sir.”

It seems strange to say but it was also good to see the poorer side of town. This last week the schools were quite nice, out of the city and the teachers were both happy, smiling and immaculately dressed even though they are paid hardly anything. It was a far cry from what I was expecting. But today you can see the poverty, where people live and how hard they have to work. But it’s not like on TV with pleading, begging faces. Just looking around more people had smiles on their faces than you’d ever see in the US or UK. It does beg the question as to which areas are developed, and which ones are still developing. In any case I’m very happy that the work we are doing here is helping the people who need it most.