To keep things flowing, and also because we had electricity, I was on this morning with the phonics workshops in the afternoon.

After yesterday’s storming success there was no problem that the Indian teachers could sing, play the games and be incredibly genki about it all. Today was to get them used to teaching themselves, and not just enjoy a Genki English lesson.

So just like the lesson plan we started off with a warm up, got the teachers in groups and had them practice being the teacher in turns. They were fine with this and although they were saying “sleeping” instead of “sleep” etc. once it was corrected they were adding in their own commands with no problems.

Then it was yesterday’s review with What’s your name? And they were actually better than yesterday.

Next was to introduce the new language and for this I chose Left and Right. You have to remember that these teachers are from very poor areas, many hadn’t gone to high school and rote learning is all they have ever seen. So instead of me modeling the lesson I had them come to the front and teach it in their own styles. This was very important for us as we instantly saw a few problems to fix. First was that they were ignoring the students in the class. They were just going on teaching the words without looking or knowing what was going on. There was no feedback.

The other problem is that some of them were jabbering. They’d say “now children, this is the hand signal that I am going to teach you the word left and you move your arm to the sides and this is very fun”… needless to say kids would never have picked up on the English she actually wanted to teach which was simply “left”. To help with this we got them to teach us the words in Urdu. Eventually one or two teachers realised how to keep it simple, check to see if we were understanding and control the class (sort of), but many of them still weren’t there. To try and illustrate the point I did the song in German, and I think what we found was that the teacher doesn’t need to bother teaching the language at all, if they just do the song the language comes along with it!

Next was to get them reading the lesson plans and figure out how to play the games. This is where the kids use the English they learn in the songs. In most countries I have the book translated into the teacher’s own language, but here that won’t help as they all speak so many different languages. It did take them a long time to figure out what a game was, and even longer to do it, so that needs work, including simplifying the lesson plan book into really simple English.

I was about to break for lunch, but the professor in charge popped in so the teachers insisted on singing all the songs we’ve done so far, and they really were amazing again. 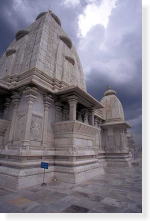 So really we might either have to cut down the number of games so that maybe they only learn 2 or 3 and use them for every theme. Or maybe remove the class games and get them using the language in reading based activities. Normally I wouldn’t recommend this as it usually kills any good pronunciation, but here they are so good at phonics that it might work.

Then again it’s only day 2. If you’ve read my blog before you’ll know that day 2 is always the toughest as the teachers are out of their comfort zone and usually do really badly. Things always turn around by the 3rd day, so lets see what happens!

For today I was totally shattered, but we had a couple of hours off in the evening so took an auto-rickshaw through the rush hour traffic to the local marble temple which was very nice. And when I was re-writing the lesson plans this afternoon, part way through I looked up from my computer, saw were I was and thought “flippin’ ‘eck, I’m in India!” which is pretty amazing when you think about it.