Thanks to "Kingdom of the Crystal Skull" everything Indy Jones is in fever pitch at the moment. This game comes from the final part of "Indiana Jones and the Last Crusade" where he has to make his way across the cavern by jumping on the crumbling letters. Here we'll use it to inject a bit of excitement into English or spelling class! 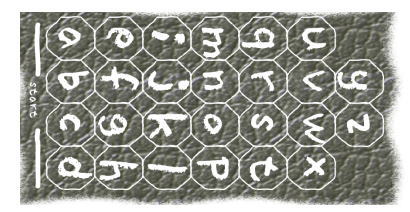 The game
1. Put the kids in teams. 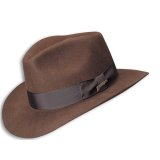 2. The first kid from one team comes forwards and puts on the the Indiana Jones hat.

3. For the phonics version the teacher shouts out a word. For the conversation version you shout out a question.

5. If they did it correctly they get a (print out of) a miniature Crystal Skull!

6. Repeat from step 2 with the next kid.

7. See which team has the most Crystal Skulls at the end.

Needless to say it's the putting on of the hat and the receiving of the skulls that makes the game!

You can use it to practice anything, either simple phonics where for example you say "Indiana" and the kids spell it out. Or you can use it with grammar points or sentences, for example the teacher says "Yesterday I ate some ..." and the kids have to think of a food then jump on the letters. With this last one you can have a rule where each letter is erased once it is jumped on, the game gradually gets harder and harder!

Also keep in mind different kids can jump different distances, so make the game space the right size. You could put the free phonics flashcards on the floor, but chalk is usually the best bet.

And of course you need the Indiana Jones music playing in the background!


Q: I love Indy..but where do you get the cool hat? And what happens if a kid doesn't know the answer??? -  Tracey
A: Just click on the hat on above, they sell them at Amazon! If the kids don't know the answer, then just use your normal teaching technique. e.g. you could help them with hints, ask their friends to help them or if you've done GE rule number 2 then simply "fail" them so that they bounce back with the "losing means try again!" line (and a smile of course!) - Richard