When I used to teach in Junior High School, every time we decided to do a lesson in the computer room even the most sound asleep, absolutely no interest in English at all boys would suddenly decide that well just for this one lesson only they'd actually decide to grace us with their conscious presence. This truly is the Playstation generation!

The only problem I found was that most learning software was just too boring or too complicated to do with a group of kids together. It was fine for studying on your own, but not as part of a class.

So what I did was to make really, really simple games for each of the topics we were studying. Each game would only last 2 or 3 minutes, and would be simply a case of listening to something and clicking on the right answer. The idea was that the kids would play around a bit themselves, then we'd have a class competition where everyone started together and we could see who finished first. These were amongst my most popular Junior High lessons and the kids kept asking to do the games again and again. And while they were playing their listening skills got better and better.

Eventually as I started working more and more on Genki English I decided to do these types of simple game for all the of the Genki English songs and include them on the CDs. And of course they're not only useful for Junior High, but also Elementary School.

Using these games in your class for even just 10 minutes is really effective as it not only gives the kids lots of listening practise ( with different accents), it also helps to break up the lesson and bring things back to life.

Usually the best way to to do things in a small classroom is to have a laptop for each student. The GE software is so simple that it works on even older machines which can be picked up very cheaply these days. The good thing is that the graphics fill the whole screen and are really colourful, even on an old PC. If you own your own school the parents are always impressed that you have computers as part of your curricula. To see if your machines are powerful enough, if the online phonics games work out OK, you should be fine.

When it's "computer game" time the kids get out their laptops and put in the GE CD. You don't need to "install" any software, it pops up as soon as you put the CD in. Plus it's also a good chance to teach some useful classroom English ( e.g. switch on your computers, plug in the mouse, etc.).

You then let the kids play around for a few minutes on the game you've chosen. I'd recommend only doing one theme's game per lesson. Keep it short and sweet and the kids will always look forward to it. Then once the kids have a got a grip on the game you get them all to restart the game ( click on the "game" button at the top) and say "Ready, Steady, Go!". The kids all press start together and race to see who can finish the quickest! You can usually do this 2 or 3 times. Stop it there as you want to end this section on a high note. Now you can go back to classroom games, songs, phonics or whatever with a classroom full of refreshed kids.

This is basically the same as the small groups above, but instead of laptops, simply take the kids to the computer room. I always found that for 30 kids it's usually better to have them in groups of two per computer. This cuts down on the amount of noise made, and funnily enough gets the kids speaking more English to each other when they play the competitive version of the games.

Again let them practise today's game for a little while, then say "Ready, Steady, Go!" and get them all to start the game together. You can usually do each game 2 or 3 times. Unlike in private lessons you probably have to book the computer room for one 45 minute block. So what I'd recommend doing is to let the kids practise one game for a few minutes, then do it all together 2 or 3 times, then select another game for them to practise, then do this all together 2 or 3 times. You can usually review 3 or 4 themes this way and it really keeps the lesson moving.

Scared of mistakes? This is why the games are so good..

The very cool thing about the games is that it encourages you to make mistakes! If you didn't catch the question the first time ( and you probably won't) , it's quicker to guess, be wrong and get it repeated than it is to worry and just wait for the computer to say it again. The kids pick up on this really quickly. Needless to say this is invaluable for students especially in Japan! The other cool thing is that for many of the games it isn't just a case of someone saying "pilot", it's phrases like "Hello, I'm your pilot for this evening". This is great for getting the kids to listen and pick out the bits they do know, rather than panic at the sound of unfamiliar words, again another important skill!

Unlike most companies that have complicated license fees and horrendous installation policies, I figured that simple is best! All you do is pop the CD in the machine and that's it. This does mean you will need one CD per computer, so to help with this we have the student packs with each CD being less than half price. For Elementary Schools you can usually get the CDs out of the I.T. ( jyou hou kyou iku ) budget which is often considerably larger than the "English" budget as software is usually a lot more expensive. Of course Japanese copyright laws prohibit you from making copies of the CDs yourself, especially if you are in a public school or are charging for your lessons.

If you really want to go to town... 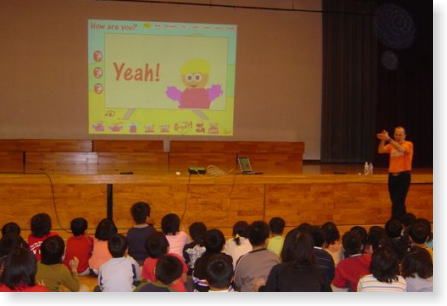 If you want to do something really special, use the school's projector and use the games in normal class. Every school in Japan now has a projector ( it's probably hidden away in the headteacher's room or somewhere) and you simply hook it up to your laptop. I'd also recommend plugging the headphone output of your laptop into a bigger CD player. Ask the computer teacher if you're not sure how to do this. Then you get two or three kids to come to front. Now start the game. ..

All the kids will listen and start giving directions to kids at the front. They point to what they think is the correct answer, then the teacher moves the mouse on the computer and click it. My favourite game for doing this is "Where is Mr Monkey?". In the song Mr Monkey gets eaten by the dragon. This really makes the kids sad! But then they love it when they can rescue him out of the dragon's tummy by playing the game. It creates a fantastic atmosphere of accomplishment when you are finished.

If you want to do something even better, more and more schools now have interactive whiteboards. I first saw this presented by a teacher in Okayama, where you can actually touch the whiteboard and hear the sounds! Ask if your school has one, a lot of them do but don't have any useful software to run on it, so have them hidden away.

I originally wrote the games as a way of reviewing. The idea being that you do the song and classroom games as usual. Then every fifth lesson you go to the computer room and review the previous four week's themes. This worked very well.

But what other teachers have found is that it works even better to do it the other way round. Instead of doing the song & classroom game first, what you do is to get the kids to do the computer game for a new theme first. When they start the kids have no idea but just click around ( again, it's the Playstation generation thing!), and eventually figure out what the words are. Teachers have reported that the kids remember the words a lot quicker using this method. Then when you come to do this particular theme in the normal classroom the kids already know all the key English, and it's just a case of teaching the song and how to play the classroom games. I'm really excited about this, it fits in really well with research that shows that kids learn better by discovering new language for themselves, rather than being "taught".

Anyway, if you're still not convinced, why not have a try at learning some Japanese this way? Over on the Genki Japan site I've taken a couple of games from the Genki English CDs and flipped them for learning Japanese. You should be able to see how quickly you learn from them.

Then once you're ready to go, pop in your order on the Student Packs' page or if you teach in Elementary School, get your school to ring Mrs Abe on 0898-48-0256 in Japanese and she'll be able to sort out all the paperwork for you.

And if you have any questions then please get in touch!