Target English: North, South, East, West + "s" and "th" pronunciations!
Target grade: All
This lesson is in the Teacher's Set
And in the new curriculum 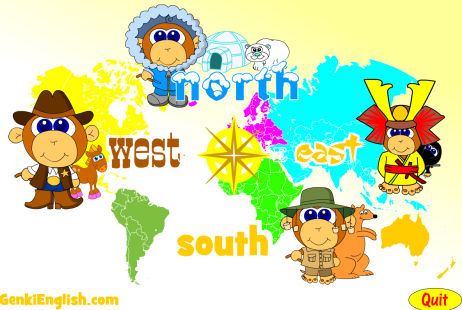 This is a very simple theme similar to Left & Right but it throws up some very interesting opportunities, including differentiating the "s" and "th" pronunciations - plus a little science!

First of all teach the new words using the software, then do the mini lesson and song with the gestures.

The gestures are very simple, just move forward for "North," right for "East," back for "South" and left for "West"

Or, do what Margit did in the video above, put the map on the wall and have the kids move up and down for North & South. Plus try adding a blindfold! :)

If you've ever struggled with remembering which is East/West yourself, then this song and dance will definitely sort you out!

Then you can try this slightly modified version of the Mr Bump game.

To start you need a little preparation, and this is fantastic work to link with science class, whilst also using English in a real context.

1. Hand out compasses (or have the kids use their phones!)
2. Get everyone to find out where "North" is. (This often takes a little while to agree on, and is great to add in some extra English phrases!)
3. Then ask them "OK, so where is East?" etc. Again this takes a little while and is a fantastic science/geography lesson!

1. Tell the kids they are hunting for Jack Sparrow's Hidden Treasure.
2. Put a flashcard of the treasure on the board at the front. (I use the one from Treasure Adventure)
3. Tell them they will be racing to see who gets the treasure first!

Now we can play the game.

1. Split the class into two teams.
2. One person from each team is the ship's captain.
3. Put the ships' captains into two corners of the room, tell them to pretend they are in rowing boats!
4. The rest of the kids in each group are still on board their ships i.e. the remaining two corners of the room and can't move from there!
5. Spread out the desks/chairs in the room. 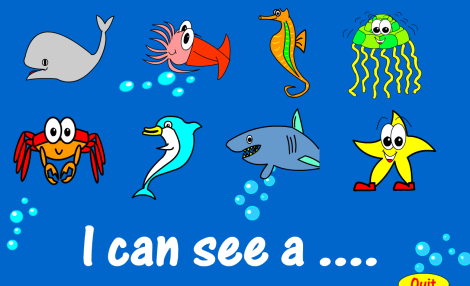 6. If you've done "Under the sea" tell the kids that Godzilla has been sharing his powers with his friends and there are now HUGE monsters under the sea i.e. the Under the sea flashcards.
7. Spread these flashcards out on tables/desks around the room.
8. Tell the kids these monsters will kill the captains if they look at the them
9. Double check everyone remembers where North, South, East and West are then ... blindfold the captains so the monsters can't kill them! ( I use scarves from the dollar store!)
10. Spin the captains round three times.
11. When you say "Go!" the team mates have to guide their captain to the treasure using only North, South, East and West - without bumping into any desks/chairs or sea monsters!


As you can tell this is a pretty fun game.
And usually it wouldn't be worth all the set up for just four English words.
But it is amazing to see how people become disorientated, how the directions get all muddled up, so is a fantastic exercise in communication between the captain and their crews.

But super strict though, none of their native language, and you can also introduce the phrase "No, that's not North, that's South!" etc. etc.!

Oh, and be sure to try being a captain yourself, it will give you a whole new perspective on what it's like to be a child in school!