And in the new curriculum

When learning a language it's a really useful skill to be able to describe something you don't know the word for. It's something I put a lot of emphasis on. And here you can double the kids' describing ability with the use of "not".

This song is so easy you can even use it as a warm up.

Ask the kids to come up with gestures for each word, or ...
wipe your brow for "hot",
wrap your arms round yourself for "cold",
hand up like New York's Statue of Liberty for "new",
make a pyramid for "old",
thumbs up for "good",
thumbs down for "bad",
hands up for "high",
hands down for "low",
and to dance fast or slow.

As the main focus of the song is the use of "not", the adjectives were chosen more for their rhyme than anything else. But there are plenty more in the I have a question and More questions songs.

If you are doing this song as a warm up, rather than as the main theme of the lesson, don't worry too much if the kids don't get the meaning of all the words just yet. Just do the song at the beginning of a few lessons, then afterwards when you explain you'll get lots of "I see!"s.

What do you think of the music to this song? It was recorded in the home of country, Nashville Tenesee!

The nice thing about this game is you have to use your brain to figure out that you can either say "not hot" or "cold". Even if your English is fluent it's a nice brain teaser!

It sounds tough, but it's very doable with a bit of practice and the kids get a big boost from finding out they can now double the amount of describing words they can use! 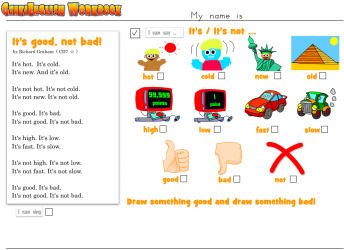 You can find this song in the Teacher's Set.

It's very usefull for my students and they really like this song because they can dance and having fun with study. They love Genki English. - Natdanongyao