But my Kids can’t do that… especially the Slum Kids

One of the biggest constraints on kids’ learning is the teacher’s attitude. And one of the biggest things I see is “but these kids can’t do that!” Have you ever worked with teachers like that?

Today it happened with, of all themes, “Where are you from?” The excuses ranged from “but slum kids don’t have a concept of India never mind other countries” to “why teach things that the kids will never see?” The reason is, of course, to give a taste of other countries, which they’ll see anyway in sports tournaments, and for when they move onto projects. 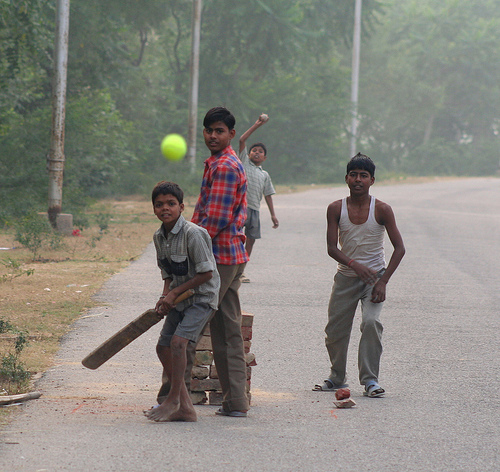 I know that every time I’ve taught in classes in slum areas the kids know international cricket teams better than me with shouts of “West Indies!”, “Australia!”, “Sri Lanka!” dominating their talks. But today I had one teacher swearing me down that this wasn’t possible because no slum kids had TVs. “Yeah, but they have access to them” I replied. “No, not at all. There are no TVs there. My children are rich and watch TV so we can teach them this, with slum kids we can’t”.

Talk about taking a red rag to a bull! Apart from being very annoyed with the teacher, but not showing it of course, I was very confused as to why she would think this. Then I realised. Our private schools are actually in the slums. The teachers are often from there, get paid similar levels and know the kids very well. The government schools are outside the slums and as the teachers get paid so much more (sometimes as much as 10 times the private school teachers!) they probably never set foot there. Hence the stereotypes breed.

My usual response is to say “really?” then show a video of the kids actually doing what the teachers had just said was impossible! The video of the kids in the Doctor Doctor game and Colours game are all slum area schools.

But I didn’t have any for this particular theme. So I asked “What about this school? Is this a posh school?” to which they all replied “no!” So I popped outside, all the kids came up to say hello (something again some teachers thought was impossible!) so I said to them “My name is Richard. What’s your name?*” After a while they started saying their names (these kids haven’t done Genki English yet remember) then “I’m from England (plus a cricket sign!) Where are you from?*” to which after a few deliberations I got “India!”. Right, so they know the concept of a country!

(*this is the reason why we teach the full sentences in GE songs, so you can give the answer first to help the kids understand!)

So after a lecture as to why we are doing all this, why should only the rich kids learn? What’s different about the slum kids? Why can’t they have the same opportunity as everyone else? I finally got them back on side. Then they did the super herolesson and realised why we needed to learn “I’m from…”

Then after days of comments such as “you’ve ruined 25 years of my teaching with this workshop” and “I’m a government city teacher – I’m not doing this!” we had one lady ask to do a speech to the group once we’d finished. I really should have videod what she said because it was so moving, but it ended with them all saying “We PROMISE to try our best with this programme”.

And that for me, is everything I ask for.

See how good Genki English Online looks on your device!

Quite a few of you have asked how good the “Full Screen” Genki Engli...