(Thanks to everyone who sent in great comments yesterday! 🙂 )

If you ever have to present to a group of teachers then it’s definitely worth trying the simple exercise below, otherwise you’ll spend all day with attitudes like “but in our country ….” “but in my school …” Doing the exercise, however, gets all their frustrations out there and gets them totally on your side! I guess one of the reasons it was tough yesterday was that I didn’t follow my own “lesson plan” and didn’t do a needs analysis (I just used the one from the week before!) so I definitely did one today.

You’ll also find that just about every teacher has the same problems to deal with!

If you’ve done the Genki English Warm Up and the Genki English Rules then they’ll be pouring their hearts out on the board (just problems with teaching English – not personal problems please!) And at the end of it you’ll have a whole list of things to base the rest of your training on. For example if the teachers are using too high a level of English, point to where they wrote “kids are bored”, because that happens when the kids aren’t understanding. Or if they aren’t into using music players then show where they wrote “pronunciation is bad” and they’ll be more inclined to try.

Here’s half of what we had today: 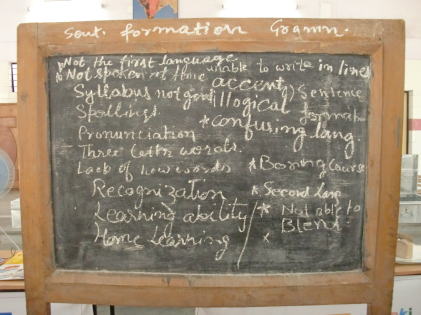 As you can (hopefully!) see most of the problems will be fixed with the Genki English and Phonics curricula we’re giving them. But of course they don’t know that yet, so you have to explain which bits relate to which problems. Then you get lots of “Aha, I see!” moments!

One of the big problems that always comes up is “Syllabus not good” or that there is too much English to teach. I always ask the teachers which syllabus they are complaining about and they nearly always say it’s the “government school syllabus” or something like that.

One of the first things I do in a new country is to study the official framework or guidelines. So I just pulled them out and said “where does it say all that?” In nearly all the countries I’ve worked in it’s hardly ever the fault of the government curricula or guidelines. In fact reading most countries guidelines they practically read like a description of Genki English (as in fact that’s what I based Genki English on in the beginning.)

The problem lies with the textbook writers. If the government is wanting a syllabus full of positive attitudes and communication skills then it is very difficult to make, and sell, a “text”book that covers these things. So what do publishers usually do? They cram the book full of as much text as possible – hence the name “textbook”. Then what happens is that the teachers, who probably have never read the official guidelines, think that they have to teach the book, rather than teach what the government wants them to teach. This is a big problem, especially when you see the Indian ones. It starts off with the Indian Constitution – in English (which admittedly the kids don’t have to read) then moves on to things like:

This is first grade. Which inevitably leads to rote learning for hours on end where the kids understand nothing, like this video example below. Just look at the kids’ faces!

In government schools we can’t throw out the textbook. And although we can promise to cover the government framework in our lessons, we can’t promise to cover everything that is in the textbook (that would be impossible.) The hope is that by learning to communicate in Genki English and learning phonics it will help the kids improve their English scores. So that’s what we’re doing, we’ve got a great team baseline testing hundreds of kids now and then also in 6 months and a year’s time, to hopefully get some data for Delhi, to go along with that we already have for Hyderabad, on how the kids’ English (fingers crossed!) improves compared with the control group who just teach like before.

There so many variables and a ton of data, but results are what we need to persuade the people in authority to spread this out to more schools.

Anyway, after all this the teachers were much better today. They did the lesson plans and were cool.

But tomorrow one other big problem cropped up!

See how good Genki English Online looks on your device!

Quite a few of you have asked how good the “Full Screen” Genki Engli...