Target Language: What do you think of ..? + I think it's good / great / cool / excellent
Target Grade: All ages
This lesson is in the Teacher's Set
And in the new curriculum

This theme is hugely popular and it's a real shame most courses don't feature it more heavily.
I'd highly recommend it, you'll have a lot of fun!

There are a few themes to do before this lesson:

4. Then it is easy to do this lesson so you can get the kids to say things like "I think he's hungry, but she thinks we're tired!" - which is a pretty great accomplishment for 4 hours of lessons!

To introduce the theme I show my iphone then ask in the kids' language "What do you think of this?" to which someone will say something like "good" So you can introduce the phrase "I think it's ...." and then the next words in the song, "cool" and "excellent"

Then you can ask about a boy in the class, saying (in the kids' language) "How do you say "I think he's great" in English?" To which the kids usually say "I think it's great!" so then you introduce "He" and "She" from the previous lesson.

Then I usually just let the What do you think of ...? mini lesson (from the software) to introduce the question. It works a treat!

In the first line the teacher says asks the rest of the class "What do you think of this?" and the 4 kids start dancing. You could maybe get the 4 kids to ask as well, but it's OK if just the teacher says it as the kids already have quite a bit to do.

Then the teacher asks "What do yo think of this?" and the kids do another dance.

Now in the chorus the teacher says "I think it's good!" whilst doing a "thumbs up".
The class repeats with the thumbs up 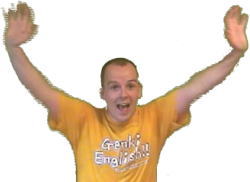 Next is "I think it's great!" whilst pushing your arms up in the air.

Third is "I think it's cool!" - you can make your own gesture here, but I usually use 2 thumbs up! 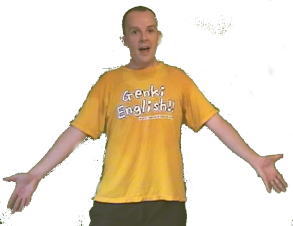 And finally "I think it's excellent!" - here I stretch my arms out to the sides!
Repeat the chorus.

In the next chorus the teacher says the line with the action and the kids repeat, but this time it's "I think HE's....."

Similarly with the 3rd verse with the girls and "I think SHE's....."

It can be a bit tricky to set this up, so make sure you do it without the music at least once so everyone knows what is going one. But when you do put the music on it brings things up to a whole new level and makes it into a fun performance piece, like being on a TV quiz show!


You can of course do this in different ways, by maybe making the kids dance every time instead of saying English words. Or make them do a self introduction instead of just English words. Or you could choose kids at random during the actual song! This can work really, really great for shy kids, because even if they only say one word, they'll have the whole class saying "I think he/she's good, great, cool, excellent!" which is a great confidence booster for anyone!

As I say this can be a bit more tricky to teach than the other themes, but it's a great way for the kids to express themselves.

1. Put the kids in groups.
2. Decide whether you will answer with "It's good, great" etc. or "It's not good great" etc.
3. In turn the kids have to ask you questions that will elicit from you the correct response
e.g. "What do you think of pokemon?" if the answer is supposed to be something you like.
or "What do you think of onion and apple sandwiches?" if it's something you're not supposed to like!

You can of course have lots of fun tricking the kids!

Or you could try this amazing idea from Margit:


Worksheet:
In each of the four big boxes they draw a picture of a famous person, place, cartoon character etc. Then they go round the class doing an interview asking their friends "What do you think of.. ?" plus whatever they have drawn in each box. Their friend answers with "I think he/she/it's.. " plus either, good, excellent etc. or "not good" etc. If the answer is positive they put a tick in the first of the small boxes under their picture. For a negative reply they put a cross. They ask five people so they have filled all five smaller boxes for each picture. They then total up the score for each of their four items, a tick is +1 point, a cross is -1 point. Go round the class and find out what things have the biggest and lowest scores! Great for finding out what's popular with the kids!

I never ever did this song until a month ago.

My sixth graders got harder and harder, not giving any opinions on anything, ...you all know this?!

I tried in their first language, but even here; Silence.

So I thought to give this topic a try. In the beginning I didn't know how to teach, but as it was Sports carnival timing, I had each of them do some "acrobatics" they've been practicing in school.

Then we did the song, watching at the illustrations; they got that.

I asked them a few "opinions" about newspaper cut outs>>silence!

So I explained that there is NO WRONG OPINION! and they can answer what ever they want. Two hands going up. It was opposite opinion of mine, but they stayed tough what was really good.

Then I gave the first set of homework . I handed out a cute notebook to each. "What do you think of.... notebook"
The first page stays empty, the second says in big letters:

What do you think of...
And after that they had to cut out one newspaper clip (picture, article, maze, manga, weather,,,,)each day and put one on each page. so seven pages until the next week.

No writing or anything else.
Also I told the parents. And asked the kids and the parents to have a conversation with their parents every day.
BECAUSE, I figured out that there were only 2 kids talking about 30 minutes to their family 3 less then 15 minutes and 1 only 5 minutes.

As none of them reads the newspaper or watches news, they seem to not know what to talk about.

Well, the outcome of this homework was that they looked into the newspaper everyday and their interest in the world definitely rose.
They had amazing pictures and articles I hadn't found.

So the next week we asked each other about one cut out, in the beginning using words from the song.

Then we went further as they started and wanted to use their own words; so they came and asked "How do you say..."

Collecting several useful words we made a list on the open first page:

On the top positive words, on the bottom a small space for negative words (they had articles of earthquake victims and typhoon disturbed houses...)

>>Next homework was to write a sentence (their opinion) under each of last weeks picture,+ three new articles (to keep them reading newspaper I'll continue that !)etc.

Now, parallel we were doing the "You're the best" song;

So next weeks homework is to cut out 5 articles again, this time having in mind the adjectives of this song. So cut out something where they can answer: "I think it's cute/ hard/hot/ fast..."

I also found some videos of Senegal at e-pals. Kids have made them and they're really simple with lot's of content in one minute.

So I have them watch one each lesson, sometimes have them write their thoughts in Japanese and then a few" I think it's ...sentences" in English.

While teaching there are many ideas from the kids and they've turned into a much livelier class. I have the feeling I'll be starting to link many more topics with this. It's starting to be my favorite topic.

This is how far I'm right now.

This turned out to be a really exciting lesson. I divided the board into 3 parts: the "What do you think of THIS, the HIM and HER. It could get a bit confusing if the kids aren't familiar with THIS-IT, HIM-HE and HER-SHE but they catch on fast. Here the kids can add a lot of new adjectives - the best ones were: crazy, stupid, bad, ugly, beautiful,super, delicious, terrible (if you use food cards). I passed out the cards and everyone put a card on the board and gave an opinion, "I think it's/he's/she's . . ." Cool clip art figures get a good rating (a lot of adjectives!)Sometimes it's a short discussion if a monster is a IT or a HIM. For homework they had to draw 4 pictures on the worksheet. This was a real surprise. They were so excited to show me their drawings. Scenes from movies, figures from computer games, books, rock stars, etc. One boy brought in his hard rock/heavy metal CD and we listened to it. Sometimes I bring in a box of flea market junk, pass out the objects and let the kids ask each other. This is a lot of fun.