They either love them or hate them, but kids are always asking me what certain bugs are called in English!! And the "Mushi King" video game has made them even more popular. So there just had to be a Genki English bugs theme.

As you can imagine, the gestures help make the song here. But "What's this?" and "What's that?" also play an important part.


In the chorus the kids ask "What's that?" whilst pointing at a random point on the floor, just like they have seen a horrendous new bug!
As the teacher you shrug your shoulders and say "I don't know!"
The kids ask again, this time pointing somewhere else ( just watch for the boys pointing at the girls hair!).
Finally you answer "It's a creepy crawly!"


In the verse the kids ask whilst pointing at the first card on the board "What's that?"
The teacher replies "It's a .." whilst miming that bug. ( Ask the kids beforehand if you're not sure how to mime each one, they come up with some crazy stuff!).

In the second half of the verse the teacher asks "What's this?" whilst pointing to a card and the kids respond whilst miming that creepy crawly. 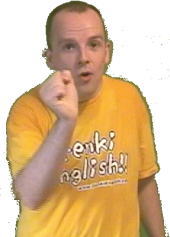 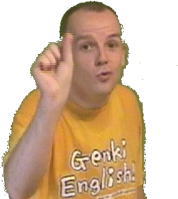 "Mosquito" ( pretend to sting a friend - the most popular bit of the song!)


As a kids' teacher you really have to go the extra mile to make the lessons fun for the kids, adding in the gestures certainly makes this happen, and it also lets them learn the new words a lot more quickly. So don't be shy, do it for the kids!

Using "What's this?" and "What's that?" really works great in showing kids that they have to answer questions with answers, and not just repeat the question back. ( i.e. I'm sure you've had kids who say "What's your name"? back to you when you've asked them!). Once you've done this song once, there's also a shorter version on the CD, where the "What's that?" line has been taken out, and starts with the teacher asking "What's this?" and the kids replying. Personally I actually prefer the shorter version right from the beginning, but they are both on here for you.

The Hawaiian theme of the music, plus the picture cards, take it out of the "icky icky" type image and make it cute and "kawaii", which is great for making the lesson fun for all the kids, even the ones who don't like bugs!


You might also be wondering why the song is called "creepy crawlies" rather than "bugs". This is because try as I might I can never get Japanese people to say "bugs" correctly - it always turns out as "bags!". Plus the fact that nearly all native English speakers pronounce it in a different way ( try it with your friends and see!), so I decided to use creepy crawlies. Some people also say "creepy crawlers", but in my research, "crawlies" turned out to be a lot more popular! If the kids ask ( and the ones who love bugs probably will), you might have to explain "creep" and "crawl" and show the ones that fly aren't really "creepy crawlies". These two words are great additions to the Warm Up game!

Plus the kids will also be learning about bugs in science class, so be careful not to misuse any words such as "insect" which have very specific meanings. As I say the pictures I've deliberately made "cuter" than real photos, and a good science activity is to point out what is wrong with the pictures. ( e.g. the ants legs coming out of the wrong section!).

And watch out for "mosquito", I'm sure we all know how frustrating it can be when Japanese speakers put extra "o"s onto the ends of words, but strangely enough nearly everyone I've met always says "Mosquit..." without the "o"! Very strange!


Right, that's about it, this song is a bit slower than the others, but it's just as much fun, and good luck getting it out of your head!

What's in the bottle?

Worksheet:
Ask the kids "What's this?" as they try to figure out what the 4 bugs are! For younger kids get them to cut out the pieces of each bug and put them back together to see the picture.


Recommended Game:
The recommended game for this theme is the Mushi Battle Game!