If you’re teaching younger and younger kids each year, this might be just the thing for the youngest of them all: www.BabySignSongs.com

Apparently it gives babies a head start on language development, gives them a big jump when they can physically talk and it causes less tantrums when babies can actually sign what they want instead of having to just scream! For English teachers it can be a great source of content for what can often be tough lessons to plan for.

Now I had heard about babies being taught sign language before but always thought of it as some hippy new-age fad type thing. Then last year I was having dinner with a friend and his family. Part way through their one year old starting signing away to his siblings. It was just unbelievable to watch, he was actually talking! Just using his hands.

I had a word with his mother and she is quite a baby sign enthusiast, she’s also fully qualified in teaching it. So as I started researching into this a bit more, it seems like it really does work.

The only problem is that it can be a bit tricky for parents to learn some of the signs. (I was hopeless at trying to remember them!). There are classes, but not as many as there could be. We had the idea of trying to sign some of the Genki English songs but that didn’t quite work as the things the average kindergarten / elementary aged kid talk about aren’t quite the same as 1 or 2 year olds. Plus the songs were a bit fast.

So I took it down to basics and came with this really easy song using just the first 3 pieces of baby signing: more, milk & please. (Pretty obvious words if you think about it!)

I sent out a few demo mp3’s and apparently it’s a big hit! So I’ve set up a new site where hopefully, depending on the feedback, I can put up some more baby sign language songs. Video is also a great help here as although the mp3 is a paid for download (to help cover the recording / art work costs), the video anyone can see on the site. After a couple of watches you’ll be ready to try it with your youngest students, or your own kids maybe! Have a go and please tell your friends, as I say if it proves popular enough online I’ll try and make some more: : www.BabySignSongs.com 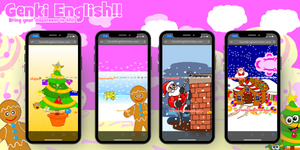 How I learnt Japanese and how kids can learn English in 2022 – Youtube Interview with Aya Sensei!

The cool thing about being all online now is that we can do interviews and chats...

In the Teaching Chats last week I mentioned it was -13° outside and everyone wa...

I had great internet today so we had some fantastic long chats with teachers aro...

How Teachers can get complimentary access to Genki English on iOS & Android!

Just to confirm that as a VIP teacher you do get complimentary access to the iOS...

It’s never too early for love :)

If you want to add a little love to your lessons this year,  you can’t do...