And in the new curriculum


See the song in action with kids in China above.

Bring all the passion of the World Cup to your lessons with the Come on, Come on Song! I wrote it for the last world cup and the kids loved it!

This is the easiest Genki English song to teach - anyone can do it in 10 minutes!

In the "Come on, Come on! song" you simply mime each action as you sing. It's lots of fun and really simple.It takes only around 5 minutes to run through and get the words right, then you can bring in the music to get the kids totally genki for the final rendition.

As with the What's your name? song, the idea of the clap in the chorus is to keep everyone in time. Ideally you'd blast this song out over the PA system, but even with a small TV as long as you keep the claps there, everyone keeps in time.

One other good part of the song is the "Come on, Come on!" chorus. Many teachers in Japan will want to teach "Ganbare", but often mistranslate it as "Fight! Fight!", so this is hopefully a slightly more peaceful translation. Heaven only knows what English soccer fans would think of thousands of Japanese fans shouting "Fight, Fight, Fight!" in a stadium!

Then introduce "Can you ...?" and work your way up to doing the Can you kick? song. This might take a whole lesson though. So I'd recommend doing the Come on, Come on song as a warm up to an easier theme, then save the "Can you kick?" song for the next lesson.

In the verse you ask the kids whilst miming the gesture. The kids answer "Yes, I can!" ( which is, of course, Genki English rule number 1!). Then in the chorus they ask you "Can I play?".

As usual, start off without the music, build up the speed then kick in the music and animation to give the class a mega energy boost.

Can you kick? Game

Grade: Elementary 2 to Junior High
Target English: Can you ...? + soccer words
Preparation: Sheet of mini cards for each student.

Teach the "Come on, Come on" song as a warm up, then run through the "Can you kick?" song a couple of times. Then...


1. Split the class into about 6 or 8 groups.
2. Assign each group a different word (e.g. kick, throw etc. ), this is the skill that that group wants to collect.
3. Give each child a sheet of mini-cards, if you hand them out as one sheet, the kids should cut them into individual cards.

4. The students then go round asking as many people as possible "Can you ...?" + the skill they are looking for. (for example the "shoot" team asks "Can you shoot?"
5. If the student still has that mini card (s)he says "Yes, I can!" and gives it to the person who asked.
6. If they have already given it away then they say "No, I can't. I'm sorry!" and walk off.
7. The group that is the first to collect as many of their skill as there are students in the class (e.g. 30 items for a class of 30 kids), sits down and they are the winner!


This is a great game for larger classes. For smaller classes, try one of the games from Small Class Games page.


Or you could try building your dream soccer team with the "I wanna make you a star" game.

Or you could of course just use the "Come on, Come on" song as a warm up for a normal lesson.

Song with Teachers in Tanzania 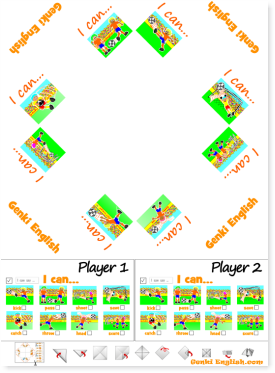 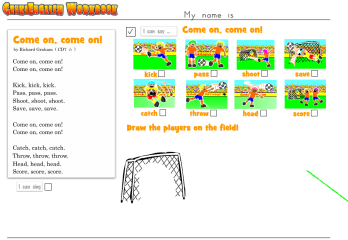 You can find this song on in the Download Pack

by Flossy in Austria

Come on Come on - This song was a massive hit . They gave it lots of 'gas' and had loads of fun doing to the actions. I had taken in a full size foam football and we played a game. The children said a word as they did the action. I am in a classroom so they had to be a little careful! eg "Throw" - child threw ball to next in circle - "Catch" said the child as they caught it!! Mostly anyway. We matched up lots of actions, had a free pass session saying pass each time and then everyone went into goal. It was very loud when the children shouted "Score" or "Goal !!!!!!" and celebrated. I liked this game as no one is out, a bit of a problem with most of my students here! It was also very amusing to watch some of them try to head the ball. I know this will become a weekly favourite as I was asked if we could play it next time.

Sign up to get my top tips, games & hints via email!