This song is in the Teacher's Set

This is a great lesson plan that gets the kids really involved, and teaches them a very useful English phrase.


1. Start off the lesson with the "Drawing Game", but make the topic "What would you like for Christmas?"
2. After you've gone through the words, give each kid the worksheet.
3. Now get them to draw one thing they would most like for Christmas, if they could have anything. It can be anything they can think of, the items on the board are just to jog their memories!
4. As the kids are drawing their things, wonder round the classroom, asking each kid what they are drawing and teach them how to say it in English.
5. When enough time has passed, teach the kids the chorus to the song.

6. Now practice saying "I'd... " and pointing to a kid who then holds up their picture and says what it is in English.
7. Once everyone has the hang of things, try it with the music as the class finale!! 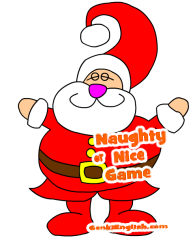 A couple of things to keep in mind are that in many countries kids probably won't get any Christmas presents, the concept might be strange to them, so don't get their hopes up too much! What usually happens is that after putting all their favourite toys and materialistic things down for the drawing game ( great for you to see what's popular!), when they actually come to think of one thing they'd really like, a lot of kids actually put down really cool stuff like "world peace" or "happiness" which is great to see. Of course you might just get the rowdy bunch who all they want is toys!

As you have to teach each kid what their present is in English it can take some time if you have 30+ kids. But most kids are quite happy to keep drawing for a long time, so it shouldn't be too much of a problem. The point is that the kids have chosen the present themselves, so it's a lot easier to remember the English. In smaller groups these presents can provide lots and lots of extra talking about why they chose what they did!

Another variation is instead of pointing at kids at random during the song, you can go along the rows and columns. Each "I want .." ( or "I'd like ... depending on which version you use ) is repeated 16 times, so in two goes through the song you can cover the whole class plus the teacher! This is a good idea if you have very shy kids.

It's also a really, really great activity for Parents Day performances. Make sure you prepare it in a lesson before hand, but parents will be very impressed by the kids singing in English, their great artwork, and being able to say something out loud in English on their own!

The song is very Christmassy, so I'm sure you'll enjoy it. If you have any feedback then please send it it, but for the time being, have a very Merry Christmas!!

Where are the Christmas presents?