Hol Smale has just sent in this very cool game, Castle Attack!
This game is without exception the most popular game I play, and I`ve played it all the way down to 3rd grade and all the way up to 9th grade (and higher, if I taught higher).

1. Divide the room into small groups. Try to keep it less than six groups, or it gets a bit messy.

2. Give each group a character (animal, or cartoon character. They like it when I give them anime, but I`m in Japan so duh).

3. On the board, draw the outlines of castles: one for each group. Don`t faff about: just a basic outline with a couple of turrets. 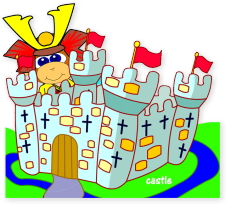 4. Then allocate a group their own castle, and put their character or anime in the castle (you can draw, but it works best if you make little pictures and stick them there).

5. Ask question; whatever it is you want to test them on.

6. The first team to answer correctly gets to choose whether to “Attack or Build”.

7. They can attack another castle, in which case one of that castle`s walls get erased, or they can build their own castle, which means getting an extra wall.

8. You can choose how many “walls” your castle has, but I tend to choose three (three swipes of the eraser) or it gets too long.

9. Once all walls are gone whoever has just attacked that castle gets to keep that anime or animal “hostage”.

It takes a few minutes to explain, but once they get it they REALLY get it. Watch them trying to plan strategy and decide who to bomb or whether to defend or attack!

This game has saved a dull class on a number of occassions.

Can you use Genki English to spice up or liven up an existing textbook or curriculum?

What if you already have a textbook or curriculum that you have to follow?  Can...