📲 It is soooo cool to have Genki English on iPhone/iPad

NEW UPDATE:  Congratulations to everyone who got in on the iPhone/iPad “Sneak Peek!”    Keep giving us your feedback and hopefully we’ll be able to launch it to all teachers and students next year! 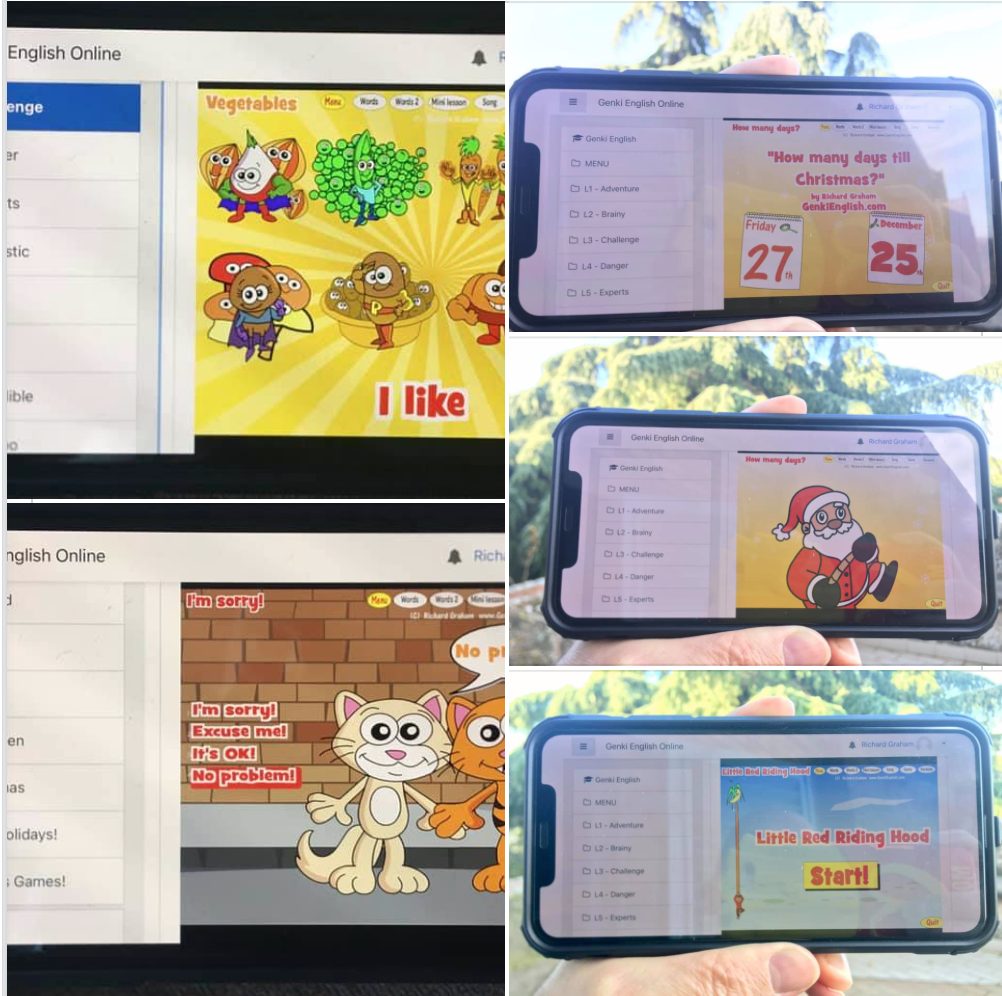 It’s taken a long, long time and lots and lots of work from over a dozen tech teams in Vietnam, Ukraine, India, Japan, Czechia, and the US,   but finally,  thanks to the amazing Greta & Andrea and their tech team in Italy, the full Genki English software is now available on iPhone & iPad running iOS 13 or iOS14!!!

It’s not a cut down HTML5 version either. It’s the FULL Genki English software with all the lessons,  all the songs, animations, games, talking pronunciation guides, talking picture books & more all in the palm of your hand!   Which is soooo cool!

Does it work on Android too?

Nearly!!!   It *should* work on most modern Android tablets and phones but this is brand new tech so we’re not 100% sure on the android compatibility for every device right now!

UPDATE:  All the “Sneak Peek” access passes to the iPad/iPhone have now gone.  Check back next year and hopefully we’ll be able to open it up to more teachers and students!

This has been soooooo much work by so many people for so many years.   Thank you everyone who has worked on this!!

I think you’re going to love it – enjoy!

How did we get here?

I originally designed the Genki English software for my Junior High classes that I only saw once per month or sometimes less.  I wanted a way where these playstation addicted kids could hear the words, play games and of course have the songs all in a really easy to use way on the computers at school.  I also made sure to add in lots of cool interactive jokes and things that change to keep all those dopamine hits coming!

Then, of course, teachers started seeing this and wanted to use it in class instead of printing out mountains of flashcards and worksheets.   Having everything talking in different accents and being lots of fun is what helped them spice up their lessons and got Genki English so famous.

Then governments started taking note.   The Thailand government put the software on 800,000 tablets for kids in primary schools!   That was amazing to experience.

At the time Genki English worked on every single computer and tablet out there.  It was super fast.  It worked on tiny screens, $100 laptops in Cambodia and even cinema scale big screens in Europe.  It worked everywhere.

Then the iPad came out and they do things a little differently.

They wouldn’t let the software run unless we re-wrote it. 🙂

The challenge was that it has taken over 20 years of hard work & over a million dollars to write & produce all the software and content as it is.

To have to re-write that all in an iPad friendly way is a HUGE task with so, so much work involved.   (Imagine even something simple like renaming all the 1000s of graphics or sound files used,  not to mention all the code and everything else )

So for the past ten years we’ve had over a dozen tech teams look at bringing Genki English to iPads and iPhones.   We’ve had amazing teams in Vietnam, Ukraine, India, Japan, Czechia and more looking at it.  At one point I also had Tony Robbins’ own tech team looking at it!

Most of them said  the whole thing would indeed need completely re-writing in a new computer language from scratch.   That is a HUGE task but it looked like it would be the only option.

So we gave the go ahead and had some amazing coders working amazing hours to come up with an iPad app version.

That was fantastic.  However….. no sooner had we finished it than Apple changed the App store rules and it would all need completely re-doing again!!

So we started looking at other ways.   HTML5 was once touted as the next natural successor.   So one of our partners who was using Genki English with 40,000 kids on tablets in rural India had an amazing India team working on the HTML5 versions of the software.   This sort of worked great!   It was a huge investment and worked on every machine.

But …….  there was just so much that wasn’t in there.   Software engineers are great people but they don’t think like kids 🙂  So many of the jokes and silly things, the smoothness of loading and, crucially,  fun ways of making sure kids couldn’t cheat,  just got laid aside.   And converting *everything* would have been almost unbearable cost both in time and money.   Plus every year it would need re-writes for new phone models and screen sizes.

So…. back to the drawing board.

More talented developers looked at making demos in different languages and environments,  searching for a way to keep all the great things about Genki English and make it work on all machines and keep it financially sustainable.

Finally this year,  after months and months of hard work, Greta and Andrea found a way!    They got every lesson working.  All the themes.  All the parts of it.  Everything working on iPhones/iPads and quite a lot of android devices too!

UPDATE:  All the “sneak peek” passes have gone now, check back next year and hopefully we can get you into the iPad/iPhone/Android version too!

Thanks to Frederic and several others asking for a Valentine’s song &#8230...

As you may have noticed Adobe have completed their retirement of their “Fl...

It’s a bit chilly outside! So what better time to do the Winter Sports les...

How To Get 43 Million Views + More Likes & Subscribers on Youtube!

BBC: Language learning is booming during the pandemic!

🌱How to grow your ideas this year!

🌱 You’ve got amazing ideas! This is how you can make them grow this year. Y...

💫 How to Teach English Online!

It looks like a lot of us are going to be teaching online again at least for the...