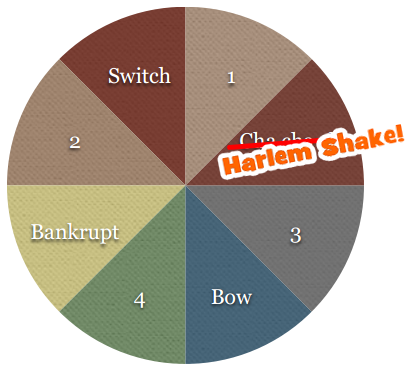 1. Draw a big circle on the board.
2. Divide it into 8 slices like a pizza.
3.Write numbers from 1 to 4 in different places.
4. Then write bow , bankrupt,  Harlem Shake, switch on the other parts of the circle.
5. Divide the class into two teams.
6. Give each team a name and give each team 5 points to start with.
7.Ask the kids a question based on today’s English.
8. Students take turns throwing a sticky ball onto the circle.
9. If they got a number from 1 to 4 add them to their score.
10. If they hit “bow” all their team stands and bows to the other team!
11. If they hit  Harlem Shake all the team should stand and dance the  Harlem Shake
12.If they hit “switch” you exchange the two team’s scores!
13.If they hit “bankrupt” erase their team’s score.

This month was another great call covering lots of things from Martial Arts to P...